I've wanted to shoot a little more studio setups. In honor of the 2 Canadian Hockey Gold Medals, a little Mr Potato Head shoot sounded like a good excuse.
Congrats to both teams. 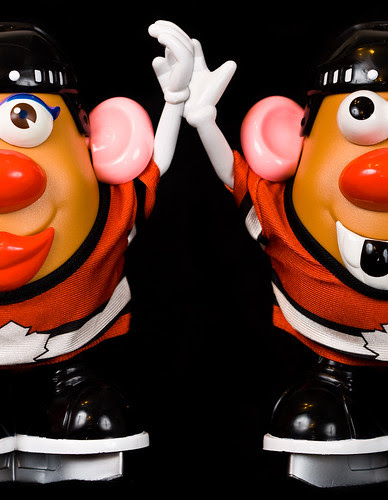 The right side is a straight out of the box Canadian Hockey Player MrPotato Head.
The left side has lips from the Sweetheart Spud, and the eyes from Princess Tater (StarWars collection)

Technical information:
Merge of 2 images, both shot at 100mm F2.8 1/60s.
2 430EX fired in umbrellas, one on either side, left one double the capacity of the right one.
Trigerred by 580EXII on camera.
Both images were merged together then post processed for better saturation and curves.

PS: Would have liked to post it right after the game, but the Hockey Player was not home :P
Posted by nick at 8:27 PM